skip to main | skip to sidebar

"KAPUR SINGH AS A FRIEND" by DR TRILOCHAN SINGH

Amongst like-minded people, Kapur Singh was always gentle and polite; amongst the learned he was always humble and eager to openly share his views; amongst friends he was always bubbling with humour and jocular outbursts, but among Akali politicians and pseudo-intellectuals he reacted as an intolerant and angry man. When I asked him the reason, he said once, “I cannot tolerate intellectual fools and political scoundrels. They pretend to know everything but know nothing about anything of importance. I have no patience with them.” Thus his impatience and intolerance became proverbial in many circles.
Posted by Nihang Singh and others at 11:15 2 comments:

“Back of Sikh society, behind their energy, their history-making potency, and their productive capacity, there is something as powerful as it is unsubstantial; it is a set of ideas, attitudes and convictions and the confidence that these ideas are viable. The Sikhs, if they are driven to the conclusion by the machinations of the present day rulers of India and by the political stupidity of a class of Sikh intellectuals, that their collectivity and the ideas and beliefs that have sustained it are no longer viable and relevant to the present situation, they will erupt before fading away. They will not become a part of Hindu Society as some short-sighted Hindu politicians believe. They will become accretions to anti-social gangs of smugglers, women-lifters. highwaymen, Naxalites and Terrorists, as those who have studied the pulsations of Sikh Society in recent times know full well. Then the deposit of Sikhism and the Sikh way of life, the panoply of history-making power will be as nothing and the darkness will gather and the north of India shall fall a prey to dark anti-social hordes, the ultimate impact of which on the history of India and this region of the world nobody can foretell. The future develops mysteriously, secretly and unfolds itself silently without fore-caution and there will appear no warning head-lines in the morning editions of favourite newspapers of these obstreperous Sikh intellectuals and over-clever rulers of India, before such a catastrophe befalls them”. 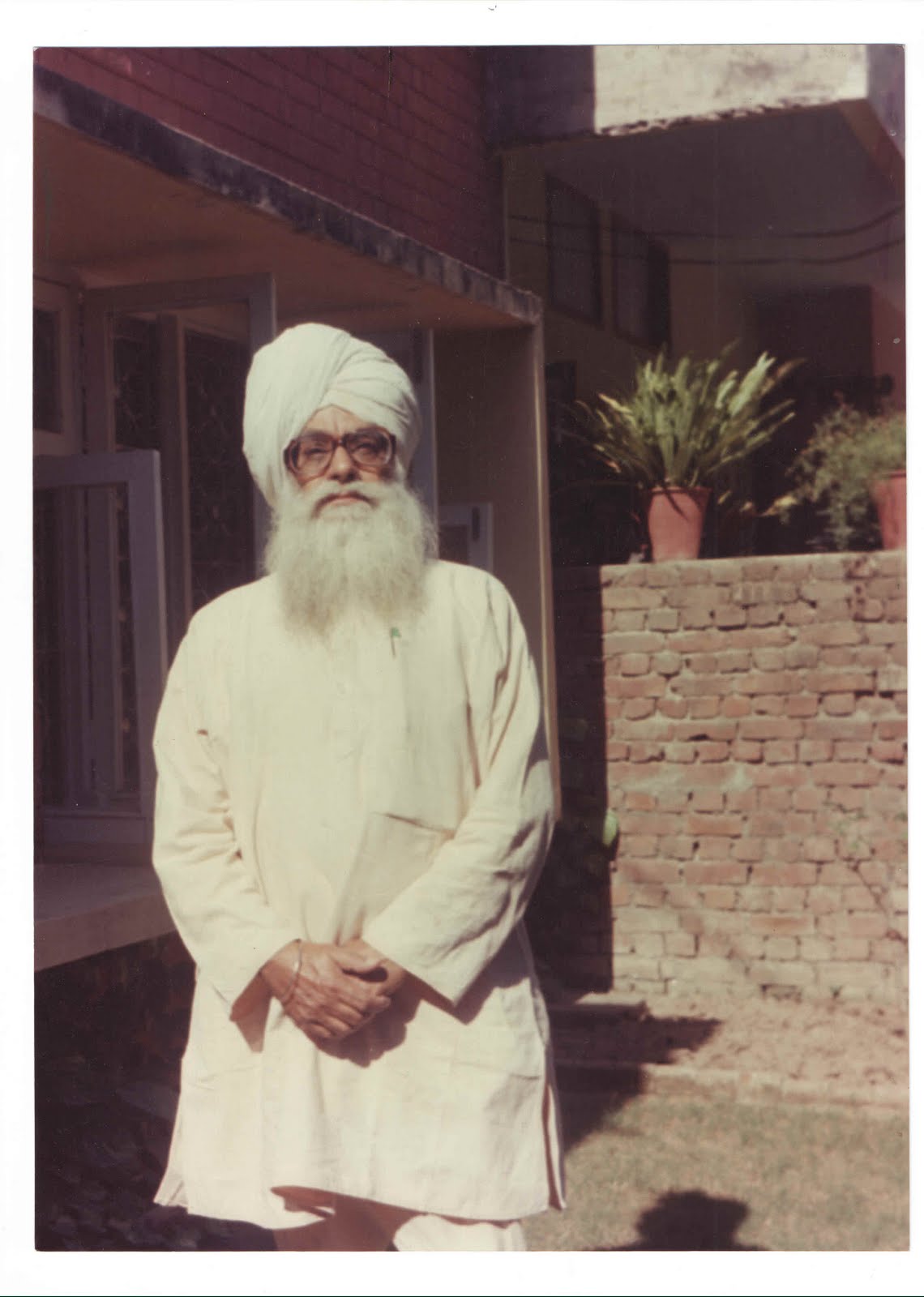 Posted by Nihang Singh and others at 10:48 No comments:

Sardar Kapur Singh's position on what Sikhi is

Kapur Singh’s position on the basic doctrines of Sikhism can be stated in his own words thus :

1. Sikhism is a social religion, non-ethnical, oecumenical grounded in a political society, directed and committed to propagation and establishing of a plural world society, tolerant, open, progressive and free in character. Thus Sikhism and the Sikhs form a unique religion and a unique society, which and who can be clearly distinguished from the other religions and political societies of the world.

2. Guru Nanak was not a mere saint, for, a saint is one who manifests in his life the true essence of an already established creed. Guru Nanak is emphatic that “I can think of no one entitled to claim my allegiance as a matter of right.” (bia sijhai ko nahi bahe dosafa pae — Asa). He was not a Bhagta proper, for, he repudiated the basic tenets of the medieval Bhakti movement of India, namely the doctrine of avatarvad and devotional worship of one form of the already manifest Vishnu through utter and unreserved devotion, although he accorded a high place to integration of trained emotions in the life of a religious person.

3. In particular, Guru Nanak is the first prophet born in India in the sense of one who claims that the religion he preaches is a revealed religion. A revealed religion is one which is imparted through a chosen individual as a consequence of his encounter with God. It is not the result of a mystical experience of a facet of reality acquired by an individual through discipline or innate propensity. It is not an impersonal empathy with some eternal truths that are seen by individuals but which, in their origin and formulation, are wholly and utterly unmade-made apurushya, such as Vedas are. The religious truths, which Guru Nanak preaches have been revealed to him, so Guru Nanak claims through a direct and face to face encounter with God, at some level of consciousness about which our psychological insights are still almost purblind. “I preach just as the Word is revealed to me”. “Jaisi mai avai khasam ki bani taisa kari gian ve Lallo”.

4. The Sikhs are a living people knit into a political organization, the Khalsa, and they have no intention of going under simply because those others view the current situation and realities otherwise. The Sikhs shall make the greatest mistake of their life if they accept the position of becoming mere camp followers of those who make the division of indivisible India a possibility, and those who proclaim that a nation can be artificially manufactured out of half-baked themes extracted from the 19th century history of Western Europe.

A nation does not spring forth from the earth as a mushroom after rain. It must struggle as a banyan tree against wintery winds and dry spells. A nation is not produced out of the corpses of living and pulsating organism and a nation is not built through intellectual arrogance and spinney. The Khalsa cannot lend itself to be used in a self-defeating process of this kind. The Khalsa shall never accept or submit to the position that technology, with its attitudes and values, is a sufficient culture or that present preoccupation with industrial production and economic goals can satisfy all human dimensions of life and can replace religion as the supreme concern of man. The Khalsa shall uphold the banner of peace and mutual understanding among men, so that the entire mankind may progress and prosper.

Posted by Nihang Singh and others at 10:36 No comments:

Once when I was with Kapur Singh at his Chandigarh residence some youngmen came and asked Kapur Singh a question; “What should the Sikh Youth do to save the Sikh Panth from the worsening situation?” Kapur Singh remained silent for some time and then said, “I will answer the question if you do not ask another question and leave us alone, we have met after many months.” The boys agreed. Raising his voice in bitterness of his experience of thirty years he said in a prophetic tone, “Remove three ‘B’s’ and three Jathedars from the political stage before it is too late and the Sikhs may get an opportunity to throw up new courageous and enlightened leadership who can guide the Sikhs in the right direction.” Then to clarify he added after a short time, “the three are Balwant Singh, Badal and Barnala and three Jathedars are Gurcharan Singh Tohra, Jagdev Singh Talwandi and Jiwan Singh Umranangal”. The record of treachery and betrayals of these three B's and three Jathedars are very much before us. Their performance in the last five years would put every Sikh to shame except their shameless Akali drum-beaters. — Kapur Singh's political thoughts and his Akali Dal resolutions (Dr Trilochan Singh)

Posted by Nihang Singh and others at 10:34 No comments:

Nihang Singh and others