skip to main | skip to sidebar

Danger of the Bhasauria mindset

From an unknown person on Sikh Sangat.com
Now that i have got your attention, most people when they read bhusaria they automatically assume bhusaria is refferred to teja singh bhusaria who was excommunciated from the panth by attempting to take bhagata di bani out of sri guru granth sahib ji. Sangat would ask why i am mentioning his name, he was excommunciated, he passed away, case closed. But if case was closed that easily, there wouldnt be major internal ideaological differences in the panth to begin with. This post will shed some light how bhausaria mindset is still alive and eating panth from inside even though bhausaria physical body is not alive.
When teja singh bhausaria some close to 100 years ago came in the panth, he bought fwd loads of outrageous claims, bold statements without any proof, far most serious all- he created sense of confusion among sangat, this sense of sansa(doubts) replicated day by day, now after 100 years his claims/statements somehow form into an beleif system itself which many sikhs some openly/some in gupt form adhere to. The sense of confusion of issue he created in the panth still exist to this day.Here are some of claims/statements of teja singh bhausaria, they still exist today in form of beleif system not as statement but subtly residing in beleif system.
This is taken from sant gurbachan singh ji bhindranwale work- Gurmat Rehit Maryada- orginal work look below:
1. There is no such thing as santhood in sikhi, this has became a very very common beleif in sikh mainstream circle, it all started from bhausaria, he started by totally taking out 13th ashtpadi from sukhmani sahib in his soo called reform sri guru granth sahib, new age sikh brothers who adhered to above beleif system do this by making bold statements like sant shabad in sri guru granth sahib ji only refers to guru sahib only and thats it without doing any actual vichar, when they debate how sants are evil and stuff most of them forget about sukhmani sahib. This is very interesting parallelism between bhausaria beleif when he was alive and bhausaria mindset which crept into beleif system which many sikhs adhere to this day.
2. Sri Ram Chandar and Sri Krishan ji Upma/Ustat(glory) had no place in gurbani/sikhi, bhausaria feeling was soo soo insecure that he actually to prove his claim, he started replacing ram with Wah and Har with Gur in Savaie Bhatt gurbani, also he took out ram/krishan and other hindu devi's/devta's in his so called reform version of sri guru granth sahib ji. New Age sikh brothers who adhered to above beleif system also do the same deed via slightly different manner which is by creating an very distrubing hindu paranioa and extreme insecurity. This is also very interesting parellelism between bhausaria beleif and bhausaria mindset which exist today, fine i acknowledge bhasuaria mindset which exist today dont have power or guts even touch sri guru granth sahib to modify what their predeccessors did but imagine in next decade if bhausaria mindset gets in the majority and start controlling panth decisions- what will they do???. Although i think this whole distrubing hindu parniao and exterme insecurity have diseased many sikhs in the panthic circle already.
3. Bhausaria orginally claimed that in ardas instead of pritham bhaguti simarkae, there should be satnam simar kai, this beleif crept again in the bhausaria mindset adapted now, it shows nothing but insecurity that if we start saying pritham bhaguti simar kai which is taken from sri chandi di var, sikhs will start beleiving in sri dasam granth sahib. Therefore lets subtly question each and every slight tradition of khalsa, ardas to naam simran so that sikhs start questioning its own tradition and start having more doubts in sri dasam granth sahib ji. This is exactly what bhausaria mindset ie- new age sikhi groups ie- kala afghana followers, missionary groups does. Sometimes they question ardas indirectly pointing towards authencity of sri dasam granth sahib, sometimes they question concept of reincarnation/heaven/hell concepts just because this universal concepts were shared by hindu dharam, again nothing but extreme insecurity shared by both- bhausaria beleif as an person and bausaria mindset which crept into beleif system which many sikhs adhere to this day.
4. Bhausaria claimed sataie balvandaie vaar is not part of gurbani, this claim crept into sikhi and was later supported by prof sahib singh who many sikhs beleive an one and only authority to translate/interpret sri guru granth sahib ji punjabi. 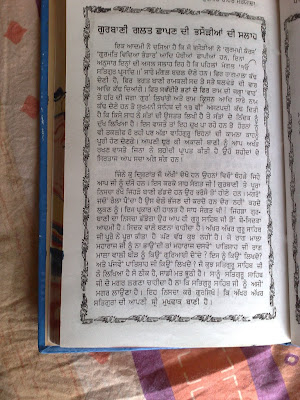 Wake up people, real enemy of beautiful khalsa panth adorned by sri guru gobind singh ji is not RSS(they are very easy to refute, nirmala samparda have refuted them many many times in the past), real enemy is dangerous Bhausaria mindset exist still today, real enemy is not a human being or set of people or organization but dangerous bhausaria mindset. Human being or set of people or organization cannot be real cause of panth setbacks, classic example- back in the time some people may have thought while teja singh bhausaria time that the real dushman is bhausaria, when he leaves the earth all claims/bold statements/ actions he took will be vanished but look what happened now? All the bhausarias beleif's have subtly crept into beleif system many sikhs adhere to now. So real enemy is that mindset not any personality, group of people. Only way to get rid of it, is by parchar which should politely target this bhasuaria mindset which has deep rooted in many praticing sikhs today.thats all for now.

Posted by Nihang Singh and others at 11:28

This bhasauria person makes alotta sense to me, im going to google him and see what else he had to say. I allways had questions about bhagtaan di baani because alot of what they wrote was against what the sikh gurus taught.

Nihang Singh and others